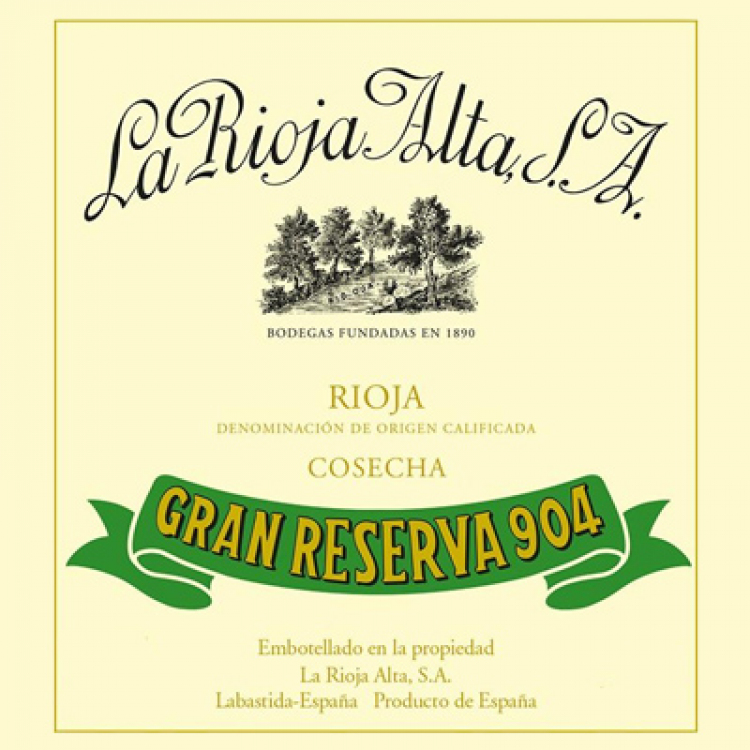 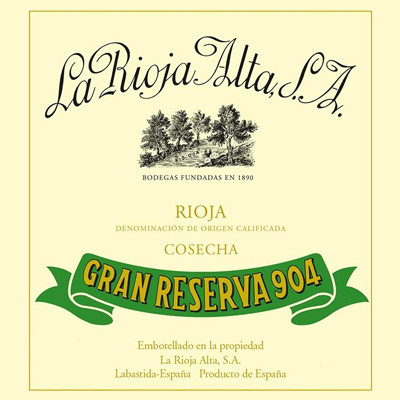 This is a driven and super tight Gran Reserva with dark berries and hints of spice and cedar. A spicy red-pepper undertone and some dried flowers. Full to medium body, integrated tannins and a superb finish. A great wine. Available in September 2018. A wine for the cellar, but why wait?

Reflecting the excellence of the vintage, as well as its power, this is the latest in a superb run of 904 Gran Reservas. Combining Tempranillo with 10% Graciano for added backbone and grip, it’s a wine that is (as ever) supremely drinkable on release, but will reward further cellaring. Spicy, aromatic and enticing, with the vanilla sweetness of American oak, savoury tannins and a core of stylish, balsamic-edged fruit. Traditional Rioja with a modern accent.

Time flies, and the 904 for sale is already the 2009 Gran Reserva 904, as they didn't bottle it in 2008. They are only going to bottle their top wines in very good and excellent vintages, so there will be a 2010 and 2011 but no 2012, 2013 or 2014. This super classical cuvée showcases the wines from Haro, silky and elegant after long aging in oak and a good future in bottle. 2009 was a powerful vintage, ripe but with good balance. The blend is approximately 90% Tempranillo and 10% Graciano, fermented in stainless steel with a 78-day natural malolactic. The aging was in four-year-old American oak barrels crafted by their own coopers; the wines aged from April 2010 until April 2014. During that time, the wine was racked every six months, to be finally bottled in November 2014. This is usually my favorite wine from the portfolio, where the balance between aging and youth reaches its highest point. It's developed but it keeps some fruit character, plenty of spices and balsamic aromas. The palate is polished but has some clout, with clean, focused flavors and a long, spicy and tasty finish. This represents good value for the quality it delivers. 150,000 bottles produced. Because they didn't produce 890 in 2009, the grapes for the 890 were in this 904. As a curiosity, they uncorked a 1982, which was superb.

Bright ruby. A hugely perfumed bouquet evokes red berry liqueur, candied cherry, coconut, potpourri, pipe tobacco and exotic spice aromas, all complemented by a smoky overtone. Alluringly sweet, broad and pliant on the palate, displaying a velvety texture to the plush raspberry, cherry cola, floral pastille and coconut flavors. Superb depth and no rough edges. Turns sweeter with air, finishing with outstanding clarity, a hint of mocha and velvety, harmonious tannins. While this wine is utterly delicious right now, I've no doubt that it'll be cruising along just fine in another 20 years or more. Aged in four-year-old American oak barrels for four years.

La  Rioja Alta traces its roots back to 1890 when five growers from Rioja and the Basque Country founded the Sociedad Vinicola de La Rioja Alta in Haro Station District. One of the growers, Daniel-Alfredo Ardanza y Sanchez, subsequently merged the group with his winery in 1904. The La Rioja Gran Reserva 890 and Gran Reserva 904 serve to commemorate these two significant events, with the “1” is omitted to avoid confusion with the vintage. The group currently owns 425 hectares of vineyard and 4 wineries - 2 in Rioja and 1 each in Ribera del Duero and Rias Biaxas. The La Rioja Alta Gran Reserva 904 is produced in the original winery in Rioja.