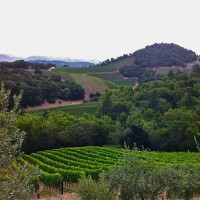 BOND represents the vision of Napa Valley legend Bill Harlan – a name the sight of which will light up the faces of all Californian connoisseurs. Harlan Estate is widely considered to be the “Napa First Growth” - indeed, this is partly self-styled as Bill Harlan coined the phrase when founding the property – yet it is an epithet that is thoroughly deserved. This project, named after Harlan’s maternal surname, is an extension of the immense talent on display at the larger, more well-known Harlan, with its own unique BOND identity.

Since its creation in 1997, these wines have come to compete with Harlan Estate itself, as well as rival cult labels such as Screaming Eagle and Scarecrow at the very pinnacle of what Napa does best – ferociously sought after, micro-production wine of awe-inspiring power and fruit.

Having well and truly established himself as one of the leading vignerons of the New World with the eponymous Harlan Estate in Oakville, Bill Harlan started assembling a team of top wine-growers and wine-makers to embark on a new venture. If it is reasonable to assert that Harlan Estate is an attempt to emulate the great properties of Bordeaux (in certain aspects) through the production of a single “estate” wine, BOND is the formidable vinous visionary’s quest to take his endeavours on a decidedly Burgundian path.

BOND remains definitively Bordeaux in its varietal composition, but the cuvées crafted at this glorious property are from the finest vineyard plots Harlan could select – in essence, these are Napa Valley “Grands Crus”. The search for suitable parcels took many years, and whilst BOND debuted in 1999with releases from the Melbury and Vecina estates, the Quella vineyard cuvée - situated on a dramatically steep slope at an elevation of 600 feet - did not produce its first wine until 2006.

BOND is an unrelentingly terroir-driven project. To date, the demanding Bill Harlan has deemed a mere five parcels worthy of selection, out of the more than 80 vineyards they have worked with over 25 years. Whilst Harlan does not work with anything other than exceptional vineyards, these five most vividly demonstrate the range of Napa Valley's finest terroirs.  The five minuscule hillside plots, ranging from seven to eleven hectares, are therefore all remarkably different. In a rather satisfying play on words (and cosmic coincidence), Bill Harlan states that the “BOND” between the cuvées is the driven desire to express as purely and honestly the vineyards’ terroir.

Similarly to Harlan Estate, BOND was sold initially through an old fashioned mailing list. What every merchant and collector would do to have had the foresight to sign up to that when they had the opportunity! The difference with BOND is that the original list was even more exclusive due to the vastly smaller level of production.