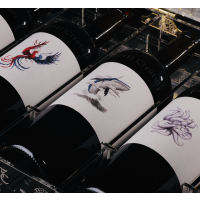 The brainchild of California-raised Jayson Hu, subsequently one of Asia’s foremost advocates of and authorities on Napa Valley, the concept behind this label is simple in theory yet exceptionally ambitious in execution.

To attempt such a feat required planning, contacts, a “spare no expense” mentality and, most importantly, the participation of four of the greatest winemakers in the world.

The Bottlings under Fairest Creature

Thomas Rivers Brown - Fairest Creature Perihelios
Arguably the most successful American winemaker since the turn of the millennium, Thomas Rivers Brown arrived in Napa from his native Virgina in 1996. Cementing his reputation across the Golden State as a supreme talent, he has been responsible for an outrageous 25 perfectly-rated 100 point wines. Collectors may know his work as the winemaker for Schraeder Cellars or his own label, the highly sought-after Rivers Marie. Rivers Brown is the winemaker behind Perihelios, a cuvée represented by the mythical K’un, a vast sea creature from the writings of Taoist philosopher Zhuang.

Philippe Melka - Fairest Creature Polyspline 2018
Born in the spiritual home of classical Cabernet Sauvignon, Bordeaux, a meeting with the then technical director of iconic Petrus saw a young Melka land himself a job at Napa stalwart Dominus before some time with a hero of the 1976 Judgement of Paris tasting, Paul Draper of Ridge Vineyards. As technically gifted and knowledgeable a winemaker as it is possible to be, Melka is one of North America’s most in-demand consultants counting the likes of Hundred Acre, Clos du Val and Beaulieu Vineyards as his clients. His own label, DANA, received its first perfect 100 points in 2007. His cuvée is Polyspline, the epitome of grace and elegance in Cabernet Sauvignon, as depicted by the nine-tailed fox spirit Jiuweihu.

Benoit Touquette - Fairest Creature Sine Fine 2018
Another French winemaker who has found his calling across the Atlantic, Touquette is the youngest member of this ensemble and poured every ounce of his passion and talent into Sine Fine. Having already worked as a consultant for Ovid, Arietta and the legendary Screaming Eagle itself, this Lyon-native possesses an enviable combination of rock-solid foundational experience with unbridled ambition and freedom. The two soaring birds adorning Sine Fine are taken from Tang Dynasty poet Po Chü-I, conveying balance and harmony.

Michel Rolland - Fairest Creature Triniceros 2018
Little can be said of the single most influential blender in history that his endless resume and string of perfect wines has not already stated. Having worked alongside winemakers and ancestorial dynasties at over 80 of the greatest châteaux in Bordeaux across more than four decades, Rolland’s talents brought him over to Napa to work for iconic estates such as Harlan and Staglin Family Vineyard. As the master blender, Rolland was given free rein to select his favourite barrels of each of the three cuvées crafted by the winemakers and create Triniceros, the flagship release of Fairest Creature and its first attempt at fulfilling the quest in search of the perfect Cabernet Sauvignon. It takes as its motive a three-horned version of Qilin, a mythical beast with the head of a dragon and the body of a tiger, representing the three winemakers at the heart of its blend.