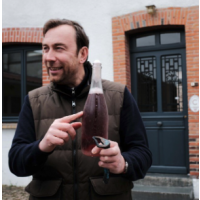 One of the most enigmatic and sought-after names in modern Champagne, Ulysse Collin is very much at the forefront of the grower-revolution across the region incomparable to any except possibly Selosse.

Olivier Collin is the mastermind behind his family estate’s rise to the very top of cult Champagne. Based on the lesser-know appellation of the Coteaux de Sezanne to the southwest of the Côte des Blancs, the Collin family has held and managed vines in the area since 1812. Still, their fruit had, until 2003, been leased out permanently to other winemakers. Olivier took the visionary decision to reclaim his first 4.5 hectares and begin crafting terroir-driven wines in 2004, after which his remaining 4.2 hectares joined a year later.

The comparisons with Selosse are particularly apt not only due to their shared status and reverence amongst collectors but also as Olivier completed an internship with the great Anselme Selosse in 2001, going a long way to explaining much of their shared philosophy.

Inspired by his mentor, each of Collin’s cuvées go through oak barrel fermentation, and he does not believe in “vintage” as understood by the other growers and Grande Marque houses. He prefers instead to meld the long-practised art of assemblage (blending) with a firm belief in the importance of site-specific terroir. Only single-vineyard wines are made under the Ulysse Collin label, with cuvée variation occurring in dosage and time on lees before disgorgement.

Naturally, each of his wines does have a vintage base upon which the wine is constructed and his extensive use of reserve wines allows these cuvées to show incredible nuance and personality. Most importantly, however, remains the signature of each plot which Collin believes possesses its own very distinct personalities.

Hailed by William Kelley (Wine Advocate) as producing wines which are ‘among the very best being produced in contemporary Champagne’ and ‘as profound as they are ambitious, this is a producer whose wines are only going to become harder and harder to acquire.