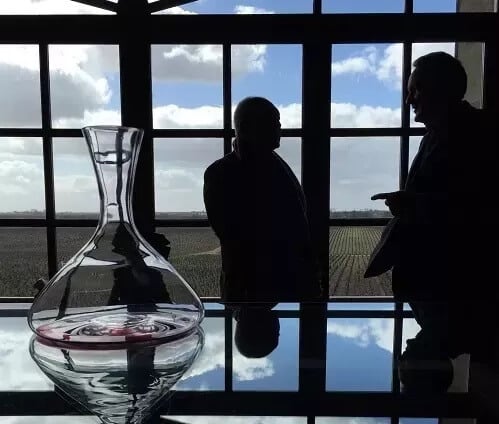 It may feel as if Bordeaux 2014 is still visible in the rear-view mirror, but some star-gazing types are already looking for hints which may tell us the fortunes of the 2015 vintage. The grapes are in and the die is cast, so truly only time will tell what 2015 brings us. In April we will make the annual pilgrimage to the capital city of the wine world to make a more informed evaluation, however we can hardly help ourselves from reading the early editions and get a sense of what to expect from these wines.

As always, the important thing is to make a distinction between what we’ve heard and what we know. What we’ve heard from the wine writers over the past few months is that most of the growing season bears the hallmarks of a fantastic vintage. Unlike 2014 when conditions were a bit touch-and-go until being rescued by hot weather in September, this year was more of a classic good vintage, with the possibility of being a great one.

Of course, it is important to avoid reducing the vintage to sound bites because many of the most sweeping generalisations are cases of ‘I spoke too soon,’ and therefore can be misleading. The summer was a hot one and had some of the lowest rainfall on recent record. Many vines were in danger of suffering damaging water stress and shutting down. This is especially problematic in the best vineyards in the region where Chateaux pride themselves on their well-drained stony soils. In low precipitation years, this is a dangerous trait. Younger vines without the advantage of deep-searching roots have a harder time accessing ground moisture and in turn suffer. The good news is that fruit from the oldest vines will be dominating the assemblages in the Grands Vins.

However, fortunately for those struggling younger vines there was relief to come in the form of gentle August rains. Refreshed and acidity levels restored, the summer heat returned and the outlook for the vintage improved. No longer concerned with drought many vignerons allowed their hopes to soar yet again with anticipation of a spectacular vintage.

The most exciting words came from Domaines Barons de Rothschild's (Mouton) Managing Director Phillippe Dhalluin as he made the audacious claim that 2015 could rival the deified 1982 vintage. Of course he was speaking on the 7th of September and made the qualifying statement that the dry, hot weather would need to hold for a fortnight longer for this dream to become a reality.

These succeeding words proved critical, as not three days later Bordeaux felt the far-reaching effects of the tropical storm season, with heavy rains drenching parts of the region. Fortunately, with a modern shift to more natural methods of winemaking in Bordeaux, rain in an overall hot year is never a disaster and this late summer deluge served to give the wines freshness and verve to finish out the year as once more the warm weather returned to see the vintage through to the end.

The dry whites were harvested well ahead of these rains and the grapes came in exhibiting exceptional balance and character, with both good sugar levels and acidity. The indicators at this stage are for a very good white wine vintage to go alongside the hopefully high quality reds. High quality dry whites are often seen as a consolation prize for a poor red wine vintage but here we seem to have the second in a back-to-back run of matching standards.

Of course the primary question to ask, should 2015 prove to be as good as all the noise suggests, is this: “What does it mean for the price?”. Surely the best vintage since 1982 means more expensive wines than last year's 2014 and even more costly than 2010 and 2009. There was good reasoning to buy 2014, in general good wine was made and offered at the right price. Style was more important than density and the wines were clearly made to be drinkable and enjoyable rather than Parker-friendly. We (wine drinkers) may hope for highly rated wines, but secretly what we really want are good wines that are sensibly priced.

We’ll of course be keeping up to date on the upcoming Bordeaux 2015 vintage and keeping you informed, so follow us on social media with #CruBDX2015 for the latest updates and offers.