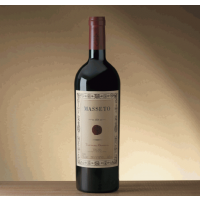 A pure and unrelenting single vineyard wine, the sibling of Ornellaia was the second label founded by the visionary Ludovico Antinori – it is now under the ownership of possibly the finest vinous clan in Italy, the Frescobaldi family.

Masseto was born out of its stubbornness and uncooperative terroir and first released in 1984. In the seismic wake of Sassicaia’s success in the 1980s, many ambitious winemakers and landowners pursued the model of crafting genuinely outstanding Bordeaux blend wines across the Tuscan coast.

The Vineyard and The Wine

Masseto, however, was a tiny vineyard of completely anomalous terroir. A single seven-hectare parcel of heavy clay, totally unsuitable for the Cabernets (Sauvignon and Franc) which were used by both Sassicaia and Ornellaia. Despite some reluctance due to it being something of an unknown quantity in the region, André Tchelistcheff persuaded Antinori to plant Merlot.

Made exclusively from Merlot, it became rapidly apparent that Masseto was something quite extraordinary. An increasingly large and receptive domestic audience quickly became a voracious international one even before its first perfect 100 point score in 2001.

A general consensus has emerged amongst not only critics but collectors alike that Masseto is the single greatest expression of Merlot to be found in Italy – without question the most desirable and prestigious. The arrival of super consultant Michel Rolland seal its fate, and Masseto was quickly dubbed “the Pétrus of Italy”, thanks to both its breath-taking quality and Rolland’s Pomerol roots.

Aged for two whole years in 50% new oak, the fruit has more than enough structure and intensity to easily accommodate and integrate this level. In such a hot climate, the primary concern for the team at Masseto has elevated sugar levels, extreme ripeness which in turn leads to excessively high alcohol. This is a balancing act of the highest order, but one in which current vigneron Axel Heinz walks perfectly each and every vintage.

The tiny vineyard produces only 35,000 bottles a year, and with the scores, it achieves the wine is almost never available.