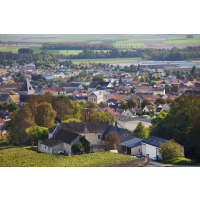 The Doyard family can trace their vinous roots to at least 1677. A marriage licence from that year lists Jean-Baptiste Doyard’s occupation as “winegrower”, and the family have had a presence in the Côte de Blancs village of Vertus ever since.

It was not until 1927, however, that Maurice Doyard broke new ground for the family and crafted Champagne under their own label, thus signifying the official creation of Champagne Doyard almost a century ago. Four generations have now toiled amongst the most beautiful Chardonnay (and to a lesser extent Pinot Noir) vines in Grands and 1er Crus such as Le Mesnil-Sur-Oger, Avize and Vertus itself as both winegrowers and winemakers.

Guillaume Doyard currently helms his family estate following the tragic death of his older brother Charles in 2017 at the age of just 31. Recognised as an energetic and hugely talented vigneron, the young maestro crafts from his hallowed ancestral vineyards.

10 hectares in total, all of which are Grand or 1er Cru level, are farmed with strictly biodynamic processes including some diligent and ever-trusty Shire horses in lieu of tractors. This respect for the terroir is undoubtedly the first step in the long and painstaking process which results in incredible Champagnes of unfathomable concentration, complexity and depth. This house style has garnered Doyard one of the most zealous and consistent followings amongst those in the know.

In the cellar, state-of-the-art Coquard PAI presses are employed to extract the cleanest and most delicate juice from individual parcels, which are all vinified separately in barrels. Extraordinarily, and a testament to the relentless drive for perfection, every single cuvée undergoes a minimum 48 months of lees ageing prior to disgorgement, developing the beguiling characteristics which can only be achieved using this method.

With a total production of 40,000 bottles per vintage across all cuvées (compared to 500,000 by the mighty Krug), collectors can begin to understand why they may not have heard of such sensational Champagnes before today – those who have but are yet to succeed in securing them may also understand!